ALL HAIL THE CONKERING HERO!

The Lore of the Horse Chesnut 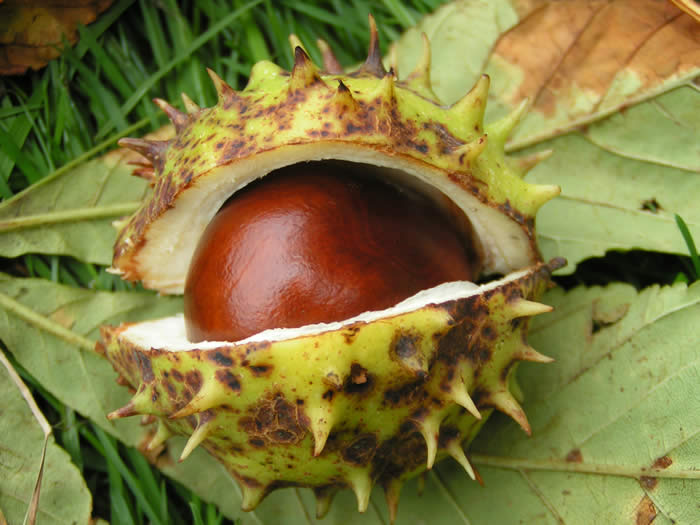 Summer is fading away, the leaves are beginning to change colour, and the kids have been packed off back to school. Yes, September is here once again and autumn is beginning. Now here in England before Halloween, Bonfire Night and Christmas, the first of all the old rites and rituals of the last quarter actually begins in this month. Or at least they do for those afore-mentioned schoolkids, whose enforced return to the classroom is sweetened by an annual seasonal playground tournament - the game of conkers!

For those of you unfamiliar with this peculiar practice, this is a centuries old game played with the nuts of the horse chestnut tree. The nuts - the titular conkers - are large, smooth and round, growing in spiked green cases, and around September time they are beginning to drop off the trees. Although thanks to the popularity of conkers with schoolkids, they are often "helped" down, and therefore should you be visiting the British Isles in early autumn and see a ring of children hurling sticks up into the branches of a tree, be assured that this is not some folk survival of an ancient rite to drive evil spirits from the boughs, but a method of harvesting conkers quickly!

The collected shiny horse chestnuts are then taken home, and in most cases these days, a parent must be pestered to get out the electric drill and holes are bored through the centre of the nut, from top to bottom. A string or old shoe lace is then threaded through the hole, creating the conker proper - a nut that came be swung in deadly combat! Now despite the British youth's reputation for hooliganism, conkers are NOT an anti-personnel weapon, neither of the melee or missile variety, and conkers are only deployed against their own brethren. 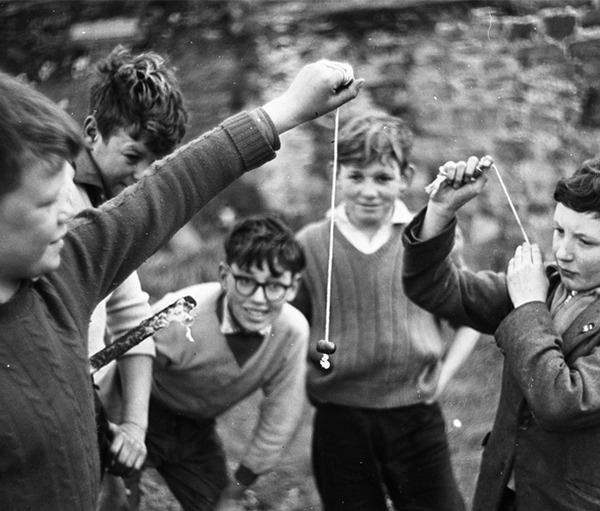 The game is played as follows - one player holds his conker hanging from its thread, and the other attacks it by swinging his conker at the dangling one. Then the roles are reversed, and the match continues until one conker smashes the other. And that is it - brilliant in its simplicity and violence, with the added twist that it may be the attacking conker that shatters. However this is a tournament based sport, for surviving conkers gain a score. A freshly made untried conker is a noner - having won no matches, where as a fresh victor is a oner! And a survivor of two matches a two-er and so forth. Of course there are regional variants to the rules and jargon - in Scotland, conkers are ranked as bully-one, bully-two, while in some areas the winning conker absorbs the score of its vanished foe - hence a newly strung oner that batters a three-er into fragments, would become a fiver - one for itself, one for the and match and then adding the three points from its vanquished foe. However whichever variation on the scoring system is used, possessing a battle-hardened veteran conker such as a ten-er or even a twenty-er, has long been a ticket to playground fame and legend.

Due to the naturally superstitious nature of children, and the peculiar oral culture that is the lore of the schoolyard, there are ancient beliefs clustered about conkers. For example, in some areas, particular horse chestnut trees are said to give the best conkers, and coincidentally often ones in places that take some pluck to visit, such as those standing in graveyards or on private lands. Moreover there is a whole slew of beliefs about how to create the strongest conker. While such folk methods are considered cheating in official conker tournaments - and yes, there are such things, the World Conker Championships for example has been held annually since 1965 - this hasn't stopped generations of schoolkids subjecting their conkers to bizarre hardening rituals. 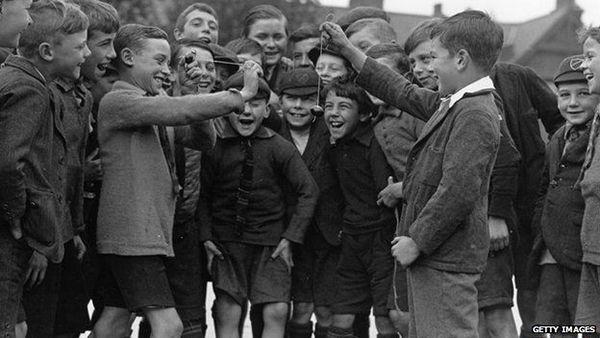 The simplest but the most annoying - for it requires planning and A LOT of patience and therefore is deemed heretical by most kids - involves keeping the conkers in a warm, dry place for a whole year. Yes, I know, a whole ruddy year! Needless to say this method is not very popular. Firstly because it's a very long time to wait, and secondly mothers tend to frown on discovering that the airing cupboard is now home to an autumnal arsenal. Boo! However for the impatient child - and let's be honest, that's all of the them - other more exciting methods are available, such as boiling the conkers in vinegar, baking them in the oven, or coating them in nail varnish. While the efficacy of any of these methods is very much open to question, there is however one sure result - an irate parent whose kitchen now stinks of vinegar, burnt chestnut and spilled nail varnish.

And thus it has been for generations. The game of conkers remains popular to this very day, although in recent years a new myth has sprung up around it. Usually just when kids are starting to collect conkers, some newspaper or other will resurrect a story that schools are banning conkers, thanks to that modern folk devil, the dreaded Health & Safety regulations. Now this bit of flim-flam is seemingly now annually reported, however it is a modern piece of folklore, that originates from a bit of fun in one particular school - as related here - intended to highlight safety issues for children. However it persists every year, despite the UK Health & Safety Executive having a special page debunking the myth.

Actually horse chestnuts are a relative recent addition to the European and American landscapes. With conkers being large and heavy, they weren't naturally distributed by birds and animals in the same way that most of our tree populations were. The tree was actually imported to Northern Europe and the US in the 17th century and only became a widespread part of the British landscape in the 19th. The first game of conkers recorded apparently occurred in 1848 on the Isle of Wight, although there is an earlier mention of a similar game played with hazelnuts in Robert Southley's memoirs in 1821. And game historians believe that such similar games had been played with other nuts and shells for centuries.

However despite the horse chestnut tree's relative recent arrival in our lands, it has accumulated a certain degree of folklore, aside from the game of conkers. The Encyclopedia of Superstitions, Folklore and Occult Sciences Vol. 2 (1903) by Cora Linn Daniels records that it is considered lucky to carry horse chestnuts in your pockets, noting that "the Walloons carry three horse-chestnuts in the pocket, as a relief from giddiness!" - although quite why the folks of Belgium needed a cure for giddiness it sadly does not explain. However this superstition seems to have grown and spread, for it is claimed all across Britain and America that carrying three horse chestnuts in your pocket is beneficial. 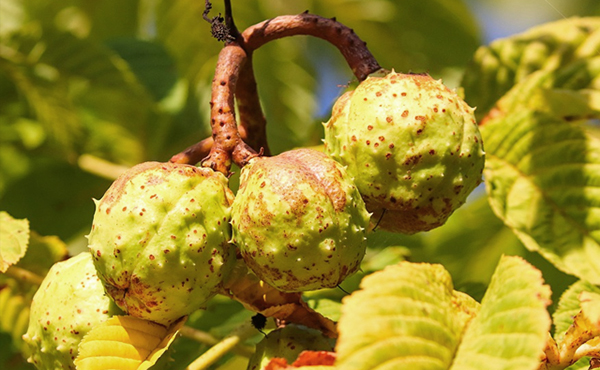 In many areas it is claimed that carrying three shiny conkers in your pocket will ensure you will always have money. While in other places, particularly in the US, it is claimed that carrying conkers - or buck-eyes as they are called over the pond - ensure virility in a man. In addition, buck-eyes are often found in hoodoo recipes, and again often in powders to promote *ahem* a gentlemen's strength. It is thought that this belief may have arisen from the supposed resemblance of the nuts in their spiky cases to the relevant pair of parts on the male anatomy. On a related but more polite note concerning the conkers in their spiked cases, in England it was claimed that the longer spines in the conker, the longer and harder the winter to come. Again this may be a belief derived from their shape, with the green conker spikes resembling icicles.

However the most common folk belief about conkers, and one that persists to this very day, is that placing conkers around your house will repel spiders. And bizarre as it sounds, this method of keeping spiders at bay is said to effective by many arachnophobes. Now from a folkloric point of view, you would expect it was conkers in the spiky cases that were said to do this trick - for again the spiky shells roughly resemble the creepy-crawlies they are repelling, and hence worked perhaps through sympathetic magic or possibly just by acting an insect scarecrows. However surprisingly the lore states it is the conkers themselves, and what's more, they must be replaced every year to remain effective.

Now as those who employ this method of spider control assert that this is indeed the case, it would rather suggest that the conkers themselves give off some kind of chemical or scent that naturally repels spiders. However despite many tests, so far scientists have failed to discover any such compounds or substances in the humble conker. But apparently another natural property of the conker is an utter disregard of science, for it is still widely reported that conkers will keep spiders away, and many folks do swear by them. So possibly there is still some magic in the old horse chestnut tree after all... 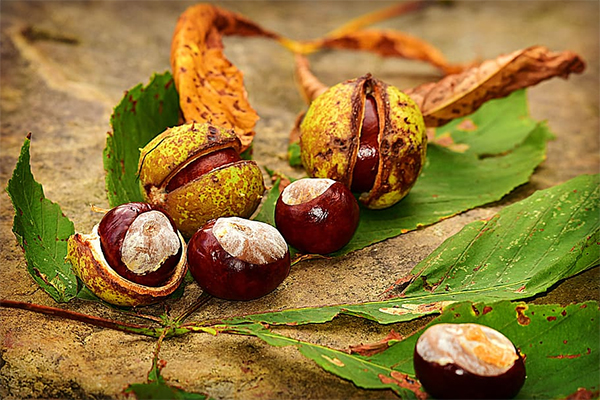