DYING FOR A SIT DOWN

The Tale of the Death Chair 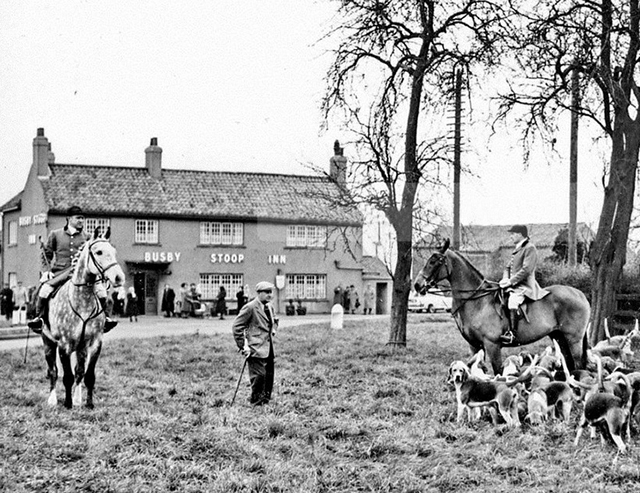 Elsewhere in the Folkore Files we learnt the strange tale of the cursed bottles in a pub in Alnwick. However they are not the only seemingly innocent but actually very sinister items to be found lurking in a British bar. Take for example the Busby Stoop Inn in North Yorkshire, a pub whose very name is steeped in death!

In 1702, Thomas Busby murdered his father-in-law Daniel Auty. However this was no ordinary family squabble, for Busby and Auty ran a small criminal empire between them, whose main operation was coining - that is the forging of currency. They were based in the small North Yorkshire village of Kirby Wiske, and it said they had disagreed over Busby's relationship with Auty's daughter. He was arrested, tried and condemned to death by hanging. After his execution his corpse was suspended in chains from a gibbet erected at the lonely crossroads at the Sandhutton crossroads. This notorious criminal and his execution were long remembered. In 1859, the English antiquarian and poet, Yorkshire historian, William Grainge wrote:

The bones of the poor wretch who had committed murder were hung to fester in the sunshine and blow in the tempest until they fell piecemeal to earth and tradition yet tells tales of night wanderers being terrified when passing this dreaded spot.

Now by the crossroads, which now forms a junction of the A61 and A167, was an inn. According to one version of the legend, it was here that Busby was arrested, while another variant proposes that he was taken into this inn for a final drink before his execution. However no matter which version it true, it has long been said that Busby's ghost haunts the place regardless. However there is a more famous, and more sinister, legend attached to this pub and its famous criminal customer. For it is said that Busby had always sat in a particular chair in that inn and after his death, a terrible curse was laid upon it. In the version where Busby was allowed a final tipple, legend claims he himself laid the curse, allegedly saying "May sudden death come to anyone who dare sit in my chair". And so, it is said that anyone who sits in this particular chair will suffer a similar fate to Busby - that is to say, a sudden and untimely death will follow shortly afterwards. The legend of the so-called death chair spread far and wide, and it became so famous that the pub eventually took the name The Busby Stoop Inn - a stoop being the post that the gibbet hung from. 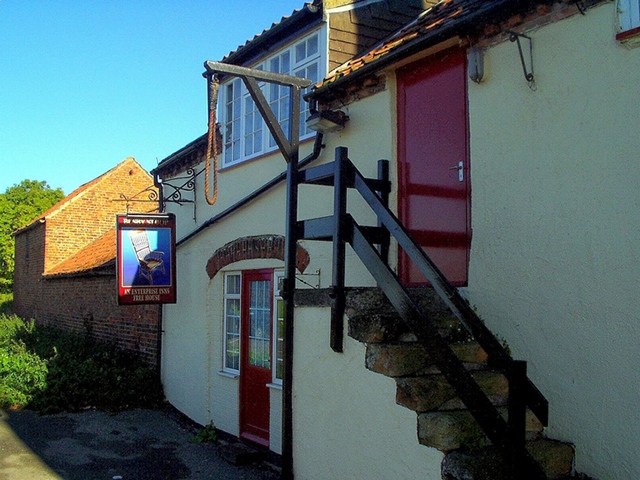 And indeed the chair appears to have been rather lethal. For there are many tales told about those who have dared to sit in the chair and paid a terrible price. In 1894, a chimney sweep who sat in the chair was said to have been found the following morning hanging beside Busby's gibbet post. During the Second World War, it was claimed that Canadian airmen from the nearby Skipton-on-Swale base dared each other to sit on the chair, and those that did never returned from the missions they were sent on.

In 1967, two Royal Air Force pilots sat in the chair, and then when driving home from the pub, crashed into a tree and were killed. A handful of years later, a builder was dared to to sit in the infamous chair, and just hours later, he fell to his death from a roof. Around the same time it is claimed that a cleaner had accidentally sat down upon the cursed chair after stumbling into it while mopping the floor. This time death came in the form of a brain tumour.

Eventually in 1978, the current landlord Tony Earnshaw decided enough was enough and moved the chair out of the public's way and placed it in the cellar. However a delivery man was curious as to why a chair was among the beer barrels and sat in it. He was killed minutes later in a crash a few miles down the road. And so the chair was donated to the Thirsk Museum where it remains to this very day. But the chair is now suspended from the ceiling to prevent any more incautious folks from trying to sit in it.

However experts have cast doubt on the legend of the chair, for when it was examined by historian Dr Adam Bowett, he found something peculiar about it. Apparently its spindles were machine-turned, whereas in the 17th century, chair spindles were made usually with a pole lathe. Therefore he concluded the chair was probably made after 1840, at least 138 years after Busby's death. However as the stories related above all come from after 1840, and we could discount a link to Thomas Busby, we perhaps should not be so quick to dismiss the lengend of the curse. Certainly no one has proposed taking the chair down so folks can sit in it again. Perhaps it is best to err on the side of caution... 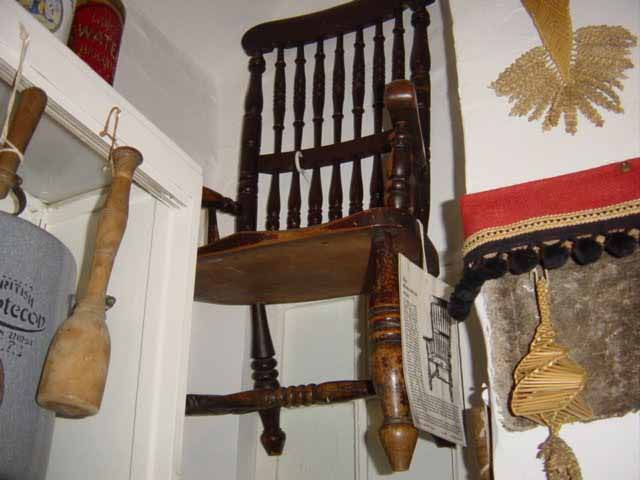